Big Wind is documentary on wind turbines in Ontario, Canada.

or watch it over your high-speed Internet connection: END_OF_DOCUMENT_TOKEN_TO_BE_REPLACED

A good history of Ontario’s electricity policies over a decade:

No one is more responsible for the ongoing electricity disaster in Ontario than former premier Dalton McGuinty. END_OF_DOCUMENT_TOKEN_TO_BE_REPLACED

At least one wind company has suspended lease option payments to land owners, while awaiting a 20-year contract from the Ontario government.

However, the company is not cancelling the lease options, merely amending them.  It seems that they still want rights to your land, they just don’t want to compensate you. Exact wording here: END_OF_DOCUMENT_TOKEN_TO_BE_REPLACED

Could this be where the 550 m setback came from?

There is no scientific consensus on a safe setback distance between residences & wind turbines. Perhaps Ontario’s 550 m setback has more to do with assuring developers that a turbine can be dropped at the back of each rural lot, as indicated by the orange area below. If the adult residents have signed a lease with the wind company, then the turbine can be placed in the yellow area as well. END_OF_DOCUMENT_TOKEN_TO_BE_REPLACED

Ontario’s government is pushing wind power, while it has clearly demonstrated that we don’t need it:

What’s in that wind turbine contract?

[The following article by Garth Manning, Chair of CCSAGE, on the dangers inherent in signing wind company turbine agreements, is directed at farmers and other landowners.  It is due to appear in the current Eastern and Western Ontario editions of Farmers Forum, which describes itself as the largest newspaper in Ontario directed at farmers, with a total circulation of 34,500 papers and more than 70,000 readers.]

You could be giving up the right to your land for longer than you are alive.

Wind companies operating in Ontario are frequently owned outside Canada, and are not interested in “saving the planet for our grandchildren” or “curing climate change” as those weary clichés would have you believe. Rather, they’re only after the biggest possible profits guaranteed over a period of from 21 to 40 years by our provincial government using the proceeds of Ontario residents’ constantly increasing hydro bills and taxes.

Wind Power contributed essentially nothing to reducing Ontario’s coal use 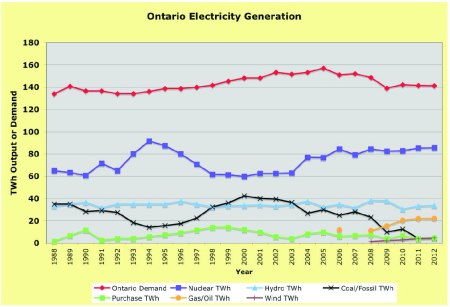 END_OF_DOCUMENT_TOKEN_TO_BE_REPLACED

How to generate opposition to wind power

Originally posted one year ago:

To generate opposition to wind power, follow the example of Ontario, Canada:

CBC Radio 1: paying operators to keep their wind turbines off

You may still be able to listen to the interview here:

It’s every lazy employee’s dream: getting paid to not do work.

It may sound far-fetched, but this week, the Ontario government will start paying wind-farm operators to not produce energy, and to keep their wind turbines off. And the province says that this plan will actually save Ontarians money, in the long run.

the province has already lost $2 billion in electricity exports because power generated by wind often has to be exported at a loss.

“Eighty per cent of Ontario’s generation of electricity from wind power occurs at times and seasons so far out of phase with demand that the entire output is surplus and is exported at a substantial loss,” the report says. “Data from the Independent Electricity System Operator shows Ontario now loses, on average, $24,000 per operating hour on such sales, totalling $200 million annually.” Read article Sun